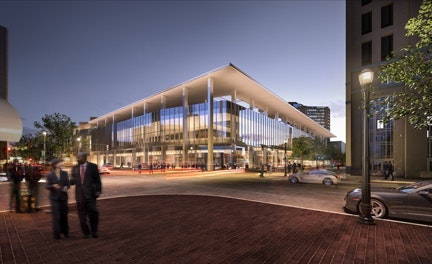 “When it’s all done, we will double downtown’s hotel room space from 3,000 to 6,000, and that will be a game changer for us,” said Jason Rittenberry, president and CEO of Kentucky Venues, the organization that oversees the Louisville Convention Center and the Kentucky Exposition Center at the Fairgrounds.

“Thankfully, the mayor’s office and the Convention and Visitors Bureau took a comprehensive point of view of these expansions. You couldn’t expand the convention center without also expanding downtown hotel rooms, and vice versa. It’s an economic ecosystem, and you have to develop it all together for it to work,” Rittenberry said. “We’re going to see it all come together in Louisville in spring/summer 2018.”

The main player in the expansion, of course, is the Kentucky International Convention Center, which is undergoing a $207 million expansion that will be completed in 2018. It will add a minimum of 50,000 s.f. of exhibit space, which will bring its total exhibit space up to 200,000 s.f. A new 40,000 s.f. ballroom will be created, without expanding the walls of the building. On the whole, officials predict the new improvements will increase the economic impact of the convention center dramatically.

According to Rittenberry, the new expansion will allow the convention center to bid for events of up to 10,000 people – enabling it to compete directly with Louisville’s larger rivals, such as Nashville, Indianapolis and Columbus, Ohio, all of which have state-of-the-art convention and meeting facilities.

“The space will have all the upscale amenities event planners are looking for, like internet broadcast abilities and Wi-Fi, digital monitors and wayfinding, larger lobby size, and pre/post-event reception spaces, which keeps them from having to move conference social events off site. It will be beautiful, modern and an investment that can take us through for years to come,” Rittenberry said.